Beaches and safari – the ideal African dream getaway. Kenya and South Africa have been providing this type of experience for generations. But with a coastline nearly 1,000 miles long and with a landmass slightly bigger than that of Turkey, Namibia has been slowly gathering pace as one of the world’s best up-and-coming destinations for quite some time now and is challenging Africa’s big two in its own right.

Namibia’s attractions are plentiful. From breathtaking wildlife to spectacular scenery and diverse cultures, the country is increasingly becoming popular with second-time visitors to Africa. Travellers can learn about the vast heritage of the country by visiting the San Bushman, Herero and Himba tribes as well as experiencing the vast array of Namibia’s unforgettable landscapes. 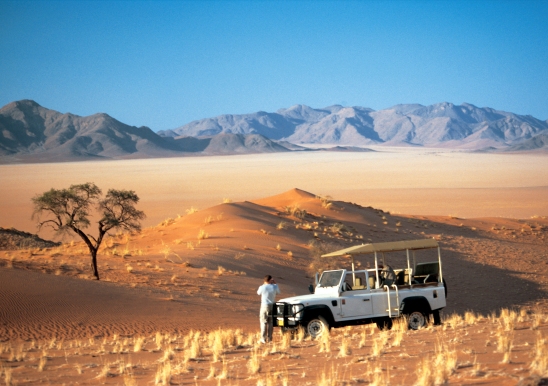 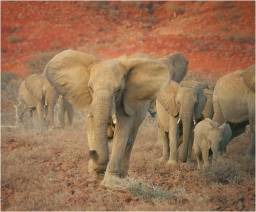 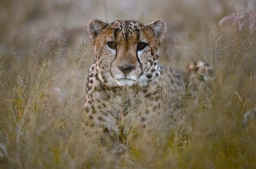 Leopard in Okonjima – picture courtesy of Namibia Tourist Board.

The country hit the headlines in 2006 when Hollywood power couple, Brad Pitt and Angelina Jolie, spent three months in Namibia in preparation for the birth of their daughter, Shiloh Nouvel. Jolie had shot part of 2003 film Beyond Borders in Namibia and fallen in love with the country and its people. Shiloh has a Namibian passport while the tabloid-christened ‘Brangelina’ clan regularly holiday in the country and donate millions of dollars to local charities.

With Namibia’s size, it is a country just waiting to be explored. Adam Forsdike is from the Namibia Tourism Board. He says: “A highlights tour for example would be to visit the dunes of Sossusvlei; the stereotypical pictures you would see of Namibia of the lovely orange sands of the Namib desert and the dead trees on the Salt Pan Etosha national park. Moving slightly further north to Swakopmund and Walvis Bay, which are colonial German towns – a great place to base yourself while you go out to the desert to do your activities. Then you can head up to Damaraland on the Skeleton Coast to really soak up the culture of Namibia; you can go on bush walks with the San, find out how the Himba and Herero tribes live and see some of the oldest rock art in the world. You then move onto Etosha which for me is the highlight of Namibia; it is unbelievable. It is not one of those safari destinations where you have 50 trucks around one elephant; it honestly is one truck surrounded by 50 elephants.

“From Etosha, you would make your way back, stopping somewhere like Tsumeb to get the culture of a mining town to see the modern day Namibia. Then back down to Windhoek, the capital, where you would want a night to soak up the atmosphere. But these are the highlights and what people mainly do when they go to Namibia, but we then get people coming back and sampling areas in the north like the Caprivi Strip which is a wetlands area. In the south, you have Luderitz which is an abandoned diamond mine and you can see sand growing into houses; it’s really quite amazing. Fish River Canyon is the world’s second-largest canyon behind the Grand Canyon and it is so spectacular and remote there and you feel one with nature there.”

Namibia is the first country in the world to incorporate environmental protection into its constitution. It is becoming one of the must-visit destinations for adventure travel while the Skeleton Coast is one of the most breathtaking shorelines in Africa. Travelling from the UK is a problem though due to the lack of a direct link – but this isn’t putting visitors off. Adam adds: “Three or four years ago, Air Namibia pulled their direct flight and that had a direct impact on tourism numbers from the UK. But it is slowly on the way back up as the people who now go to Namibia don’t mind changing flights in either Frankfurt or Johannesburg. Initially this was a problem and tour operators didn’t want something which wasn’t a direct flight but since that initial hesitation, numbers have gone back up and people don’t mind as much as numbers are going back up and if this continues then hopefully one day we will get the direct flight back.”

To hear more about the attractions of Namibia, play Adam’s interview below (please note interview is embedded in Flash so may not play on Apple devices).

For more details on Namibia, visit the website of the Namibia Tourist Board.